University of Pécs
Faculty of Law 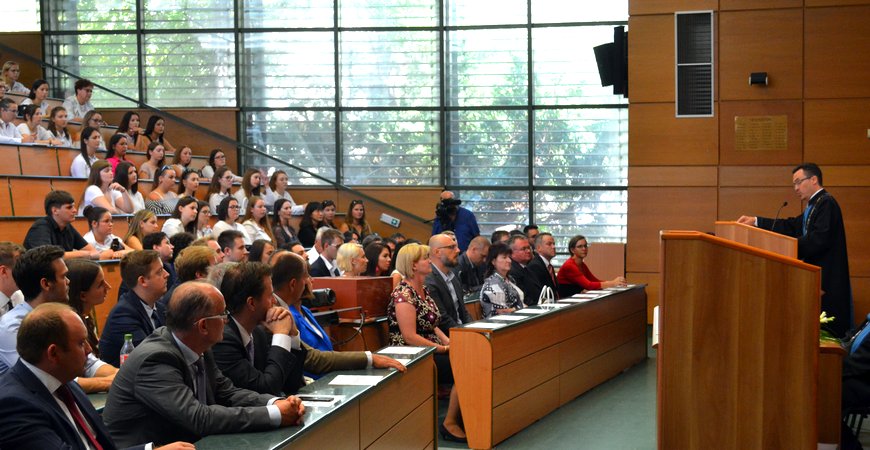 This year the Faculty of Law, University of Pécs held its first partner meeting combined with the ceremonial opening of the new academic year.

The aim of the Faculty was to create a platform for the leaders of business and state administrative organizations interested in lawyer training that serves as a meeting place for the educational institution, the would-be employers and the supporters of the training. The main topics of the event of 2 September were comprised of the strategic objectives of the Faculty of Law of Pécs and the future of lawyer training. The event was enhanced by a unique concert performance given by the Brass Band of the University of Pécs.

“I consider it a success of the event that we were able to strengthen our existing relations and cooperation. Together with economic actors, we would like to better exploit the possibilities provided by lawyer training in the future. We aim to reinforce the practice-oriented training structure by involving external training sites. At the partner meeting I expressed my gratitude to organization leaders and their colleagues supporting the training for their assistance provided to the faculty” – said Dean of the Faculty Dr. Adrián Fábián.

On the occasion of 20th August, the Day of the Foundation of the Hungarian State, Minister of Human Capacities Miklós Kásler conferred the Civil Division of the Knights’s Cross of the Order of Merit of the Republic of Hungary on Dr. Gyula Berke, associate professor and Head of the Department of Labour Law and Social Security Law at the Faculty of Law, University of Pécs, former Dean of the Faculty. Dr. Ágnes Balogh, associate professor at the Department of Criminal Law, was awarded the Golden Cathedra Award. The President of the Republic of Hungary appointed Dr. Csaba Fenyvesi, associate professor and lecturer of the Faculty, to the position of university professor as of 1 September 2019. In the academic year of 2018/2019, from the ranks of our lecturers-researchers Dr. Ágoston Mohay obtained the “Habilitation”, while Dr. Emese Pál and Dr. Dávid Tóth were awarded a doctorate (Ph.D. degree). The Scholarship of the Republic for the academic year of 2019/2020 was awarded to István Szijártó.

UNIVERSITY OF PÉCS
FACULTY OF LAW